Share | https://www.jwatch.org/fw117539/2021/02/21/lancet-series-tackles-us-hiv-epidemic?query=pfwTOC&jwd=000020094311&jspc=GP
The Lancet takes aim at the US HIV burden, the highest of any of the G7 nations. In dramatic contrast to the quarantine, contact tracing, social isolation, distancing and masks demanded by Public Health for the COVID19 pandemic; HIV patients and those living an alternative lifestyle demand and receive the exact opposite. Hospitals, clinics and physicians can not test for HIV without written permission. While hospital admitting lab tests still include a routine test for Syphilis, routine testing for HIV is not included. Only a difficult strategy of universal precautions affords protection for other patients and hospital personnel. Surgical and obstetric cases must be carried out with the assumption of risk, requiring extensive shielding against the inevitable spattering of blood. The risky behavior, personal privacy and confidentiality if not silence demanded by the HIV community was political from the start. If testing, quarantine, contact tracing and isolation had been required from the first case of HIV, there would have been no epidemic in the US, or if HIV did spread by undiagnosed immigration, it would have been contained. Indeed, COVID19 would have been contained too if China had not deliberately denied its threat and encouraged its spread.
As a nation, we were more than willing to suffer quarantine and contact tracing for Syphilis, Tuberculosis, Poliomyelitis and even Mumps. The contrast between the protocols for HIV and COVID19, however, illustrate the compromise needed between Constitutional freedoms of choice and the suspension of that freedom in the face of a highly communicable and highly fatal disease. The choices needed to balance a fair compromise might better be made by medical judgements than by politicians. Even so, there will be an inevitable difference between clinical opinion and that of public health. It becomes even more problematic when public health becomes politicized or politicians intervene.
Posted by Clancy Hughes at 2:23 PM No comments:

This is a slow take on some serious questions. First of all what is the NEJM doing writing a political editorial accusing the president of mismanaging the COVID pandemic? The assertions, largely untrue, beg both academic and scientific credibility. NEJM publishes Journal Watch and other CME articles and enjoys an authoritative role at the heart and sole of academic medicine.

The second thing that seemed strange was NEJM’s guidelines for treating COVID19. The guidelines have come to be a treatment imperative for a number of reasons mainly medical-legal. These published guidelines restrict treatment with antiviral drugs to when the patient requires high oxygen flow rates. By then it’s too late. One might assume that some if not most hospitalists will follow those guidelines. So doing, goes against all intuitive medical judgment and appears to be in contradiction to all experience in treating influenza and Vanderbilt’s rather spectacular success in containing Ebola, 11 cases, 4 deaths, 2 nurses and a doctor recovered.

Directing criticism of President Trump’s management of the Chinese virus seems misplaced. Trump cut off travel from China well before WHO condoned it and shortly after CDC trace managed and guaranteed the first known US case in Illinois. The president furthermore held daily public briefings with CDC physicians and evoked the emergency measures act to manufacture personal protection supplies, drugs, test kits and respirators all of which were cut off from the Chinese manufacturing and supply chain. US manufacturers came through in heroic fashion.

Guidance for masks, testing, distancing, isolation and quarantine were driven home from the podium. The economy shut down and the rest is history. The responsibility for balancing deaths from the pandemic with deaths and displacements from the shutdown is awesome and there may never be an acceptable solution, but not for lack of leadership.

Public health is a state run institution, a fact largely misunderstood by the media. Furthermore, masks and isolation authority runs contrary to the legality of individual freedom of choice. What ever mandate that’s legal, comes at the state level. Also, public health is not a clinical specialty. There was always a disconnect between clinical medicine and public health. Most physicians choosing public health do so not to see patients.

It’s a matter of opinion, but at this point in the pandemic, management might better be directed by clinicians, medical schools especially. Public health has exhausted its role in preventing the spread of the virus, maybe it was a lost cause from the time the CCP deliberately encouraged its worldwide spread. Clinical medicine can do much to reduce the death rate with early treatment. The case for early treatment was dramatic with Trump’s rapid recovery at Walter Reed.

Googling publication of NEJM, revels  mass distribution if not publication of the NEJM in China, in Chinese. I wonder just how much investment, domination and ownership the Chinese Communist Party (CCP) now enjoys with what amounts to the backbone of continuing medical education (CME) in the US.

Not a conspiracy theory but serious questions about the integrity and possible subversion of the NEJM.

Posted by Clancy Hughes at 11:57 AM No comments:

Share | We should be focusing on the various immune antibody cocktails  and early treatment. Prevent deaths, lung and organ damage more than the spread of cases, a transition from public health to clinical medicine. Get bureaucracy out of the way, and deliver massive amounts of the early treatment modalities to primary care physicians. Treatment > prevention, family physicians should have access to these treatments, treat early and treat often. The President has it right. Treat early like the first line physicians treated him, when hospitalized with shortness of breath, it’s already too late.
Posted by Clancy Hughes at 9:34 AM No comments:

Share |Pure speculation, based in part by POTUS’s rapid recovery and apparently greater success rates in under developed or what we thought of as under developed countries in treating COV-2
Our reluctance to use unapproved off label therapies in the treatment of COVID19 in the US, seems both endemic and contra intuitive. The guidelines published by the NEJM limit initiation of remdesevir to patients requiring high flow rate oxygen. Physicians have been sanctioned for advancing off label treatments, and I wonder how patient care came to depend on bureaucratic permission. Furthermore, Science Published an article suggesting dysfunctional FDA approval processes and questionable studies causing major delays.
Clinical medicine often conflicts with Public Health interests, and the treatment phase of this pandemic may be such a conflict with the, can I say, less respected health care and public health authority. Have we failed to make the transition from public health measures to serious aggressive individual patient care?
Posted by Clancy Hughes at 8:12 PM No comments:

Share |
COVID 19 challenges medicine to the limits of public health, diagnosis on the molecular level and treatment at that level as well. The pandemic also challenges medicine's economic structure. Physicians should take a serious look at the medical economics of Chinese Globalism.

I’ve spent the last few years writing my book, Globalization or Democracy, and in a sense the work was a rewrite of my life’s goals. Prior to the Korean War, I was in my senior year at KU with a major in economics and a pathway to graduate school in the East to study international commerce. I had a fascination with the macroeconomics of trade. I knew about business along the Mississippi, growing up in St Louis and about wheat from high school and college in Kansas and, on occasion, the wheat harvest. Jon Ise was the highly respected economist and professor at Kansas; his grass roots economics and the extensive, required two-year Western Civics course, left an indelible impression.

Half-way through my senior year, the Chinese crossed the Yalu River and I was not quite far enough along in credits to be exempt from the draft. I joined the Air Force with the intent to fly. It did not work out quite that way. I got married. Son John came along and I followed my fathers and my brother’s path into medicine. I never quite got over the economics, however, and for that matter the need to fly.

After retirement, what was I to do but move to Alaska and fly a seaplane charter operation for ten years, the best ten years of my life, and after that with and a 50 Emeritus medal for medical practice from the University of Michigan, I wrote my book on economics.

Economics was there all the time, the grass roots fundamentals of supply and demand. It was there as I hung my shingle in Littleton, CO, and as I managed partnerships, two incorporated clinics, and both starting and managing a rural community health clinic in a remote Colorado cattle town. Supply and demand and liquidity was there as I ran a single pilot, part 135 air charter company in Alaska. Furthermore, an economics education did not hurt me in decades of equities market investing. All of that past experience came together as I wrote about the futility, yea the threat of Globalism and the CCP lead cartel of Internationalism. 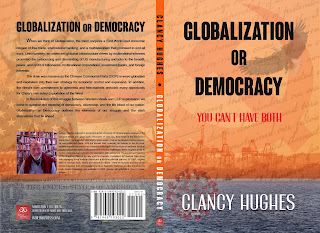 As we wake up in a COVID 19 pandemic, June of 2020, with economic recovery and social chaos, we have only one not so clear choice and that is the Chinese Communist Party’s, Globalism, advanced as China’s new world order or not. It’s Chinese dystopia or Democracy. Globalism started out as an ideal but oligarchs, greed and the PLA soon bent Globalization to its own self interest while we all contributed. I’ve attempted to outline the economics that drove the failure of an internationalist dream that goes beyond contemporary economist’s assertions. Always a contrarian, one must see what the market misses. I think, contemporary economists, for the most part, take an idealistic approach of moral equivalency, meaning that just about anything multiculturalism dishes out, should be taken as economic fact. I think economists fear for their reputations, their tenure and their, for the most part, high paying jobs.

In any case, if you read Globalism or Democracy, you will be reading about my life and the path I did not take.  Enjoy

Posted by Clancy Hughes at 12:52 PM No comments:

Share |EHRs are trying to do the wrong thing. A clinical note, consultation or completed H&P express an elegant succinct communication between physicians and an ongoing novel of a patients progress. Not only does each encounter, each patient, each disease present a unique narrative, but each specialty and each physician contribute a unique perspective. No way can a team or an EHR reflect the color or content of a patient encounter. The physician dictated note alone can capture the subtleties of an encounter or facilitate continuity of care. The nightmare of entering EHRs in the presents of a patient pales by comparison to reading an EHR and trying to find what the previous physician was thinking among the vastness of irrelevant and superfluous misinformation, pages and pages of it.
EHRs should be the preview of nurse alone and relegated to a separate file, Nurses Notes. Physician notes, dictated by the physician alone should constitute the official record. All the legislated requirements and their execution can remain in the nurse’s EHR.
Posted by Clancy Hughes at 9:00 AM No comments:

There will never be an agreement, so what we ned is health care for Democrats in one system and healthcare for Republicans in another. Then both parties can have exactly what they want. In a perfict world, the two systems would turn out to be the same.
Posted by Clancy Hughes at 11:39 AM No comments: